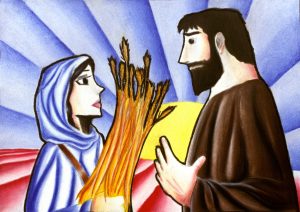 Let’s look at a puzzle from the Book of Ruth, fourth chapter. When the elders of Bethlehem gave their blessing to Ruth’s marriage with Boaz, they said:

“May the LORD make the woman who is coming into your home like Rachel and Leah, who together built up the family of Israel. May you have standing in Ephrathah and be famous in Bethlehem. 12 Through the offspring the LORD gives you by this young woman, may your family be like that of Perez, whom Tamar bore to Judah.”

There are two statements here worth noting. Making Ruth like Rachel and Leah sounds nice, until we remember that they brought forth sons for Jacob in a bitter contest for preeminence, a contest Rachel eventually lost when she died on the road to Bethlehem in Ephrathah. The Septuagint (LXX) renders the blessing thus:

“May the Lord make the woman who is coming to your house like Rachel and Leah, who together built the house of Israel and wrought mightily in Ephrathah.”

By this, I take it that the elders knew this marriage was going to be a terrible struggle for Ruth, until her death. In the next line they give her standing in the county of Ephrathah and the township of Bethlehem. Standing is the same thing as citizenship, a thing usually barred to foreigners.

They were being asked to weigh the relative merits of the law of land redemption vs. the law that forbade Israel to intermarry with their neighbors. Although they ruled in favor of Boaz, their speech indicates they knew giving standing to Ruth would not be accepted by the people.

No one knew that Ruth would become David’s grandmother—and through him—the Son of David’s. If Ruth had not been given standing, David could not have become king. Boaz’ heritage was equally tainted; his mother was Rahab, the Gentile harlot of Jericho. As a result of this, David’s legitimacy was suspect all his life. Jesus had a similar problem with legitimacy, as his mother was with child before she married.

The other interesting thing about this blessing is that the elders knew Ruth and Boaz were not the first to pull this off. The precedent was set many years before when Judah married his daughter-in-law Tamar after she conceived Perez out of wedlock by convincing Judah she was a prostitute.

The obscure law of land redemption—together with the duty of levirate marriage—is a triad. The first instance is the earthly. Tamar tricks Judah into giving in to lust to force him to marry her after his first two sons die, and after he denies her his last son.

This precedent was allowed to stand so that Perez was accepted as Judah’s heir. Because of this, the elders of Bethlehem could not deny Boaz his request after Elimelech’s next of kin took off his sandal and gave it to Boaz in their presence. Perhaps they did not want to do it, but they were persuaded by precedent.

The marriage of Judah and Tamar was the prototype, with Ruth and Boaz the antitype, but the first was sensual and ugly, while the second instance was spiritual and beautiful, leading to the birth of our Redeemer, a typological dyad revealing God’s omniscience and foreknowledge, praise be to God!

So where does the third instance occur? That depends on how well we have paid attention to the names in the Book of Ruth:

Ruth means companion or neighbor—love your ruth as you love yourself (Lev. 19:18)

Boaz means in him is strength

Now retell the story with the translated names:

My God the king had a wife, the pleasant land of Israel. Although he loved her, he was forced to take her away into exile. She had two faithless sons, Perishing the northern kingdom, and Sickly the southern kingdom. They each married Gentile wives and worshipped their gods, but both died in famine. Their widows were Fawn and Companion. The first became bitter, but the last only better.

Israel went back to her husband’s land to beg. She tried to send her daughters-in-law away because no man would be allowed to marry them. Fawn went back to her people and gods. Companion said, “Where you go I will go, and where you stay I will stay. Your God will be my God.”

She is a Gentile bride.

She meets a Strong Man who is humble and kind. He accepts her, protects her, and gives her the same standing as the natural born servants in his household. She kneels at his feet. He takes her to the water jars, and he (the Lord) serves her (the servant) a meal of bread dipped in wine vinegar.

At the risk of being too obvious, the third instance in the triad is the law of redemption offered to the entire world.

Consider the scandal before the angels, as the holy God comes to earth in flesh to redeem the land of Israel, by marrying a Gentile bride who is not even a virgin. He justifies me by some obscure law in Leviticus, giving me a name and standing in his kingdom.