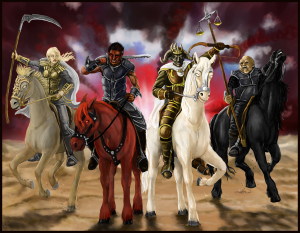 Every prophesy has a life before it is fulfilled, a life while it is being fulfilled, and a life after it has been fulfilled. Our reactions to each part in the life of a word of prophesy is different. At the time John wrote the Book of Revelation, everything in it was still future, but when Christ returns, much of it will be the past.

As long as prophesy is still future, who knows how it may come about? Any speculation we might offer is as valid as the next person’s. This changes when the prophesy is fulfilled and becomes the past. At that point, the facts about it are facts and become settled history. Speculation ends, and the meaning of the prophesy should be clear.

There is a window of time in which prophesy is being fulfilled, during which some believers may recognize it, but most do not.

Looking to the Bible for guidance on discerning the times in which we live, I find three helpful passages:

From one man [God] made all the nations, that they should inhabit the whole earth; and he marked out their appointed times in history and the boundaries of their lands. God did this so that they would seek him and perhaps reach out for him and find him, though he is not far from any one of us (Acts 17:26-27, NIV).

This first word was given by Paul to the Athenians in his apologetic. God, Paul says, marked out the appointed times of all the nations so that we would seek and find him moving in the events of our day. We are to reach out to God to understand the times in which we live.

The Pharisees and Sadducees came to Jesus and tested him by asking him to show them a sign from heaven. He replied, “When evening comes, you say, ‘It will be fair weather, for the sky is red,’ and in the morning, ‘Today it will be stormy, for the sky is red and overcast.’ You know how to interpret the appearance of the sky, but you cannot interpret the signs of the times. A wicked and adulterous generation looks for a sign, but none will be given it except the sign of Jonah” (Mat. 16:1-4, NIV).

Jesus rebuked the religious leaders because they should have been familiar enough with prophesy to discern that Jesus was fulfilling it before their eyes. He said they would not be given any more proof than they already had until after he would rise from death (as Jonah did), because they were wicked and unfaithful to their covenant with the Lord.

Then [the apostles] gathered around him and asked him, “Lord, are you at this time going to restore the kingdom to Israel?” He said to them: “It is not for you to know the times or dates the Father has set by his own authority (Acts 1:6-7).

This last word sets a limit on moving beyond a general discerning of our times, to any kind of date-setting, as tempting as it is to think we could. Christians have fallen into this trap many times, and have been repeatedly humbled and proven wrong.

The discernment I’m advocating respects this. As long as the prophesy is still future, we have no authority to say when or how it will come to pass. That said, Jesus expected those who were given prophesy by God ahead of events to recognize the times they were in. He rebuked them when they could not do so without additional signs and proofs.

How like them we are today! We have been given prophesy about the end times in which we live – much of it still future – but some of it is already past. More importantly, some of it is unfolding before our very eyes, and few recognize it.

Typology can help us with this particular blindness, as the patterns in prophesy are around us today in current events throughout the world. If we pay close attention to what symbolic language means in scripture, we may be surprised to see how many of the end times prophesies have already happened, some within our own lifetimes.

This is where I believe we stand with respect to the four horsemen of Revelation Chapter Six. When we read John like a Western book, we stumble because John was not a Western writer. Jewish books have a non-linear structure that John uses, in which events are painted with a broad brush first in rapid succession, then goes back in time to fill in the details of the main events.

What appears to our Western eyes as four horsemen sweeping across the world in rapid succession at the end, is really just a quick summary of events that will occur over hundreds of years that were still in John’s future. Some of them are now in our past, giving us every right – nay, duty – to discern the times we are living in.

This problem bothered me as a youth and has bothered me in graduate-level study of scripture as an adult. Only in my old age have I been able to see that God is not tardy in the fulfillment of his promises, as Peter says in 2 Pe. 3:9-10:

The Lord is not slow in keeping his promise, as some understand slowness. Instead he is patient with you, not wanting anyone to perish, but everyone to come to repentance. But the day of the Lord will come like a thief.

The ride of the four horsemen, in my view, is already well underway. The only reason we do not recognize it, is that the Lord is patient, so that the judgements have been stretched out gradually across the centuries since Jesus ascended to the right hand of the Father.

Q: Where is Jesus at the start of Revelation Chapter Six?

A: At the right hand of the Father. The time of the four horsemen is while Jesus stands where he has been standing for a long time now. Some things that were future to John are already the past and present to us.

We are like the proverbial frog in a pot of water that is slowly getting warmer. We do not yet realize that the pot will soon boil. It is sooner than the majority opinion says, and yet further off than many of us wish. We must recognize the patience and mercy of God in everything He does.

For a deeper look at the Four Horsemen of Revelation Six, please visit my small group Bible study page, and scroll down to the last one: https://michaelmannauthor.com/bible-studies.