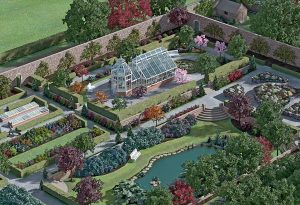 In the last post we saw Solomon as a type of Jesus in the Kingdom Age, come to take his espoused bride from Lebanon to his palace in Jerusalem – where it turns out he has a private garden. His beloved thought she was courting a lowly shepherd, but discovers that he was really the king in disguise, the same man she dreamed of and prayed to in the first song.

Remember that the Song of Songs was presented for an audience by actors as a dramatic musical play, so the plot twists in it make sense for the genre.

Before we enter with the beloved into the king’s garden, consider the meaning of the garden theme in the Bible. Gardens were a setting for privacy, reflection, intimacy, and love. Only a lord or landowner with a considerable fortune could afford to build and maintain one. They were not just plantations of herbs and vegetables. They were built with a high wall around them as private sanctuaries. Gardens needed a source of water – sometimes engineered with fountains and reflection pools – that is hard to come by in arid regions. They were filled with fragrant plants, exotic fruits, flowering trees and shrubs, and organized into sections with walks, grottos, and lovely places to meditate or woo a lover.

Paradise is another name for a walled garden. It comes from an old Persian word that means a park surrounded by a wall or parapet. Medieval churches were sometimes built with a walled and gated garden between the road and the front door called the paradise.

The garden theme represents God’s love. When he made the garden for Adam and Eve, he caused them to “abide in his love” by living in it. Each garden in the Bible shows a different and higher aspect of God’s unfathomable love:

Song Chapter 4:13-14 mentions nine fruits. We will examine them carefully in the next post, but the verses before and after them make curious statements that deserve our attention:

As the play proceeds, I expect the king’s beloved to enter his garden, but he says she is the garden and he is going to enter her! How can this be?

There is an obvious marital context, but let’s go deeper than that. When we believed in Jesus, we received His Spirit. He enters our heart and dwells in us. This means that for Jesus, our hearts are his garden, His private sanctuary (or temple, see 1 Cor. 6:19) where he can show his love without holding anything back. He has locked our hearts and kept the key for Himself alone. He would rather be in our hearts than anywhere else, because we are His paradise. He is our Master Gardener – in the Old English, our Husbandman – pulling up weeds and briars by the roots and planting us with every precious fruit of his Spirit. He is like a river of life inside us, “a well of flowing water streaming down from Lebanon.”

The other curious statement follows, where the beloved answers:

16 Awake, north wind,
and come, south wind!
Blow on my garden,
that its fragrance may spread everywhere.
Let my beloved come into his garden
and taste its choice fruits.

If I were out in my garden with my beloved, I would not pray for wind; so why is that here? In Hebrew, the first meaning of ruwach is spirit, and the second is wind or breath. The beloved asks her Lord to blow upon her garden – her heart – with His Spirit, so that the fragrance of the fruits in it will spread everywhere. Thus the love of God in the secret place becomes a fragrance that attracts the whole world.

In Fruits of Solomon’s Garden Part Two, we will examine the fruits growing there, and see what each of them is.