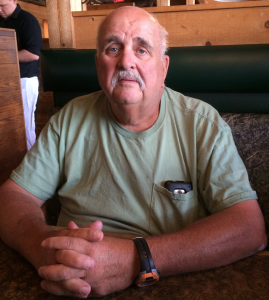 In Part Two, I told about the power that accompanies my friend, Gary Ring, when he shares the good news, and the impact it has on people you would never expect to come to Jesus.

He said, “Even when someone is anointed by God, he or she still needs a teacher.”

Gary’s teacher was Opal Pooler, a destitute Indian woman in Wilbur who was the most powerful person he ever met. She stood up to the pastors and priests when they taught something that wasn’t in the Bible. They shunned her for it, but any time someone was going to die they came and asked her to pray. She would fast and pray, and anything she asked God for, He did. She taught Gary how to bring down the Spirit of God. She would kneel and whisper, “Jesus, Jesus.”

After he got the Holy Spirit, the community shunned him too. The priest said he was a joke. His first wife left him. His father and brothers would have nothing to do with him. It was 1971. His mother organized a prayer group with about 40 people praying for him, for nine days. They prayed that God would make him an evangelist.

On the ninth day, he was cleaning out the sheep barn with Glen Schaffer, whose wife had left him too. Both men were feeling like they were less than what they were shoveling. Gary said, “I think we just need G—.” Before it was out of his mouth, the light came down onto him again, and the Spirit changed him on the inside. That night in bed, the Spirit kicked him in the back twice to wake him, and told him to read Psalm 27. In my Bible it has the title “Of David; before he was anointed.” His life since then is described in it perfectly:

“Though an army should array itself against me, my heart shall not be afraid; though war should rise up against me, in this I shall hope. One thing I ask from the Lord; this I will seek, that I may dwell in the house of the Lord all the days of my life, and behold the delights of the Lord.”

While this was going on, Father Bennett and Dick Driscoll were conducting a charismatic clinic at the Episcopal church in Wilbur. People were being healed as Father Bennett preached on love. When Gary heard about it he could not stay away. He met two of the Jesus people that came from Seattle to support the clinic. After it was over, they took him back with them to Queen Anne Hill, baptizing him in Green Lake. Three old women walking down the beach said they saw a dove come down onto him as he came out of the water, prophesying in another language. They gave him money to help him start his ministry.

By 1975, the Jesus people were no longer welcome in some of the churches, as a new teaching became more popular. This new message preached health and wealth to anyone with the faith to get it, but it flew in the face of what he learned from Opal Pooler. She died horribly of some disease, but every person in the hospital she met on the way out heard about Jesus. What would she have said about preaching health and wealth? She would have stood up against it.

The wife of Gary’s friend had some kind of cancer all over her face. She was losing ground fast. He prayed for her and the Lord healed it completely, restoring her skin visibly. She went to tell her pastor about it. He agreed that the Lord performed a wonderful miracle for her, but then he asked if she would please go worship somewhere else. He told her that healing miracles were too controversial, and that her testimony might harm the church.

Gary says he does not know why the Lord heals some people, while others are not healed. “His reasons are none of my business,” he often says. I was there in 2007 when his second wife died at home. He prayed for her many times, but she died anyway. He believes the Lord took her home so that he can finish his work, but it left him feeling bitter for several years.

“The root of bitterness came out over time,” he said, “but not until I was willing to let it go.”

Gary tells church leaders in Spokane not to focus so much attention on social programs, building projects, or preaching on what words mean in Hebrew and Greek.

“Go back to your first love,” he says: “Jesus crucified, the hope of glory.”

He sees big changes over the next 15-20 years, beginning next year. Not a single disaster – but several smaller ones – that could reduce Spokane to a shadow of what it is. He has seen an earthquake and wall of water from upriver change the shape of the downtown area. He also sees a fault open under Lake Coeur d’Alene.

Looking out at the traffic on I-90, he said, “I see all the lanes choked with cars heading East on both sides of the median, like rats from a sinking ship on the west side. He thinks Seattle could be more affected by earthquakes than Spokane. “Back in the 80’s all the prophets were saying it.”

“I don’t know,” he says. “I may live long enough to see it, or not. My testimony is not the important thing. I hope someone will read what you are writing, and feel a touch from God. Now is the time to seek our Father in spirit and in truth. Remember Nineveh. If we humble ourselves, you never know if He may have mercy on our generation like He did for them.”