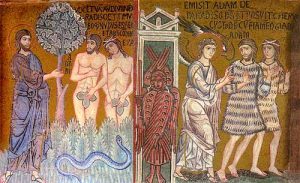 In the previous post we explored a rule for interpretation of types and figures in the Bible. Now let’s look at another. In 1 Cor. 15:44-46 Paul writes:

He offers the example of Adam as the natural man who came first, with Jesus the spiritual man coming afterward, calling him the “last Adam.”

Types occur in pairs (dyads) and threes (triads), with the natural or earthly example first, and the spiritual or heavenly example last. We see this particularly in the stories of people from the Bible. This pattern in the lives of Bible characters is illustrated in greater length in my book, The Two Breads.

Other examples include Esau—the worldly twin—being born first, and Jacob—the worldly failure—taking second place, his hand grasping his brother’s heel. At the end of the story Esau is cursed, elevating Jacob to the position of firstborn.

Saul was the king the people asked for, but David was the king after God’s own heart, whose kingdom endures forever. Saul was never able to throw off Philistine rule, but David did, and afterward he established the Kingdom. 2 Sam 7:11-14 reads:

In each instance we see a principle of interpretation, as Jesus says in Mt. 20:16, “So the last will be first, and the first last.” At the end of the story, the spiritual man or woman receives preeminence, and the earthly man or woman takes last place.