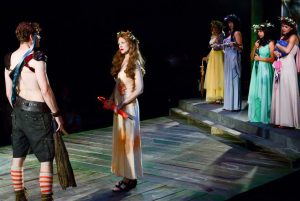 When Solomon became king, he asked the Lord for wisdom and knowledge to judge Israel. The Lord answered him that night, saying,

11b Because this was in thine heart, and thou hast not asked riches, wealth, or honor, nor the life of thine enemies, neither yet hast asked long life; but hast asked for wisdom and knowledge for thyself, that thou mayest judge my people, over whom I have made thee king:

12 Wisdom and knowledge is granted unto thee; and I will give thee riches, and wealth, and honor, such as none of the kings have had that have been before thee, neither shall there any after thee have the like.
(2 Chron. 1:11-12 KJV)

God said he gave Solomon more wisdom, knowledge, riches, wealth, and honor than any other king in history. Keep this in mind as we consider the books he wrote:

12 And when thy days be fulfilled, and thou shalt sleep with thy fathers, I will set up thy seed after thee, which shall proceed out of thy bowels, and I will establish his kingdom,

13 He shall build an house for my name, and I will stablish the throne of his kingdom forever.

Although David had many sons, Solomon built a house for Hashem and became *the* son of David, and by this covenant *the* prototype of Christ in the kingdom age to come. There cannot be a higher honor than that.

So now let us consider the first of Solomon’s books, the Song of Songs. The title makes it clear that the book itself is the greatest of all songs – and so it is. But as prophesy, it has been misunderstood. The mystery it contains is at once so obvious and profound, it has fooled many of our best Bible scholars.

Songs must be sung. You don’t read a song, you sing it before an audience. The book cannot be understood in the form we have it, because it was to be performed publicly, like a theatrical play.

In this play there are apparently three characters and a chorus. The genre is the same as in the classical Greek plays, like Oedipus Rex, but Solomon’s Song predated them by 500 years. I think the greatest of the Greek playwrights knew Solomon’s Song, and imitated its style. In musical plays, music helps the audience to understand the meaning, because it conveys the truth behind each character’s speech, even when a character’s words are deliberately deceiving.

My father loves opera, so I grew up listening to operas in Italian. They follow this structure, with characters giving speeches (arias) followed by commentary in the choruses. It’s clear what the characters are saying from the sets, costumes, props, music, and actions, even without a libretto to translate their words. It’s a powerful way to tell a story that sears it into memory, whether the audience can read or not.

In the Song, the first character is the Beloved, a Shulamite maiden up in Lebanon who is secretly in love with Israel’s young king. The book begins with her prayer to him. Her father has died and is in heaven. Her mother lives, but she has half-brothers (from a different father) who treat her cruelly and make her do their work. She has no time to make a living on her own – like Cinderella – slaving away her days while she dreams of her prince.

Does it seem strange that she prays to him? The mystery of the Son of David is that he is God. Even from a hundred miles away, he is able to hear her prayer and answer it, but that comes later in the story. All she knows is she is being held in bondage, that she loves Solomon, and that she desires to be his bride.

The second character in the Song is the Lover, a mysterious shepherd who comes and goes, but expresses his desire to become the maiden’s husband.

This is where many commentators get the story wrong. They say he represents competition for her love between the heavenly king, and the sensual man. If this were the case, he would not come as he does, without splendor, house, or money, and smelling of sheep. If he represents the world, he should have something worldly to offer, but this man has nothing to offer but himself.

1 Who hath believed our report? and to whom is the arm of the Lord revealed?

2 For he shall grow up before him as a tender plant, and as a root out of dry ground: he hath no form or comeliness; and when we shall see him, there is no beauty that we should desire him.
(Isaiah 53:1-2 KJV)

The mystery of the Lover is that he is the Good Shepherd – Jesus of Nazareth – a man with nothing to offer except himself. He has nowhere to lay his head, and yet he says he will adorn her with gold and silver, and build her a grand house with cedar beams. This is pretty big talk for a shepherd.

Jesus is like the mysterious shepherd. We have an encounter with him that redirects all our desires. He makes promises to us that are hard to believe. We make up our minds to follow him, then it seems like we can’t find him anywhere.

The Beloved maiden goes out into the dark streets of the city by night looking for him. She encounters the watchmen at the city gate and asks if they have seen the one she loves. They open the gate, and she goes out. She finds him beyond the city wall, clings to him, and accepts his proposal of marriage. She says she will marry him that very day, and offers her mother’s room for their wedding night.

Now I ask, Dear reader, where else have we heard this story?

Jesus came as an ordinary man, born in a stable, laid in a manger among the sheep to become the Shepherd of Israel. He offered himself to Israel, but the leaders rejected him and delivered him to be taken outside the Damascus Gate to be crucified.

Standing by his cross were women weeping for him. One of them, Mary of Magdalene, was a woman Mark says Jesus cleansed of seven demons. Is seven significant? Yes, there are seven churches that Jesus cleansed and made promises to in Revelation 2 and 3, but let’s go on.

Joseph and Nicodemus bought the expensive spices and linens, and the women prepared them while Joseph went to ask Pilate to release the body for burial. The myrrh had to be crushed to release its potent perfume, and the aloes had to be boiled to make the waxen liquid that would seal the body from the air within its linen wrappings.

Three days and three nights passed, the “sign of Jonah” that Jesus said was the only sign he would give the unbelieving Jewish leadership.

Did Mary hear him say it? I think she did, because she got up in the night and made her way through the dark streets of Jerusalem, looking for the one her heart loved, before dawn on the third day.

When she came to the tomb, she saw the angel watchmen guarding it. They asked why she wept and she said she was looking for the one her heart loves. They allowed her to pass through the doorway. After she came out, she saw the gardener standing there, just an ordinary man – nothing special. He also asked her why she wept, and whom she was seeking.

She asked if he knew anything about the one her heart loves.

Mary saw Jesus standing there by the tomb, clung to him, and would not let him go until he broke it off. It was not time for the wedding yet. He still had something to do. He would return for her after he went to his father. She went home and kept her purity, waiting for his return.

Didn’t he cleanse us of every kind of evil? Didn’t he speak words of life to us? Didn’t we make a firm decision to follow him no matter where he goes, even to his cross?

The Shulemite maiden and Mary Magdalene were us. One witness from the old covenant, and one in the new. We are the Beloved in the greatest of all Songs.

In Part Two, we will turn our attention to the mystery of the third character in the Song, and the prophesy it holds for believers.