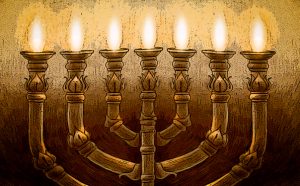 Many Bible readers shy away from the Book of Revelation because it does not fully explain itself. Jesus said he taught in parables so that unbelievers would not know what he was saying (Matthew 13:10-17). He blessed his disciples to see, hear, and know the mysteries of the kingdom of heaven that others cannot see and hear. The Book of Revelation is like the parables in this respect.

My teachers taught me to stop when I come to a figure I don’t understand and look it up in the books of Moses. Whatever it meant in the first instance, that is what it means in every instance. God said that He would speak to all the prophets in dreams, visions, and riddles, but to Moses He spoke plainly (Numbers 12:6-8).

If the Bible is just a collection of disjointed writings by men who had too much religion in their heads, or too much wine in their stomachs, then this approach would be preposterous. Every writer could and likely would assign his own meaning to any figures he used.

But, if the Bible is the very word of God, dictated to reliable secretaries who did not know what God meant – that faithfully wrote the words He spoke – then it is fair to say that the entire volume has just one Author, and He is not one to change His mind about what figures mean. Whatever it meant when He spoke plainly to Moses, that is what it means when He speaks later on in dreams, visions, riddles, and parables.

If we recall that in Genesis 2, seven = finished = complete = resting from works = sanctified or holy, then it should not be difficult to make sense of the sevens we read in the Book of Revelation.

Rev. 1:1-3 clearly states that this is a book of prophesy, containing “things which must shortly take place.” If this is the case, then the chapters with letters to the seven churches can be taken as a look into the future from John’s perspective. If there are seven churches, it is a look at the complete Church as it unfolds in the Church age, until it is finished when we as one body receive eternal rest.

God dwells outside of time, but also enters into time to reason with us. The seven churches were real groups of believers in the Roman Province of Asia, but they are also parables and figures – riddles – about the complete church. Jesus gives them to help us see our inadequacy, repent, and rely on Him, but there is more to them than this. When we see the conditions described in the seventh church, we know our day of rest is near.

There are seven lamp stands representing seven churches, because the church is the physical structure that holds up the Light of the World, or Christ, to illuminate the world during the Church age. In the Jewish temple, the golden lamp stand or menorah in the holy place had seven lamps that were never to go out. This is a picture of Christ, but we are his body, and he (our light) walks among us while we are in the world.

And I beheld, and, lo, in the midst of the throne and of the four beasts, and in the midst of the elders, stood a Lamb as it had been slain, having seven horns and seven eyes, which are the seven Spirits of God sent forth into all the earth. Rev. 5:6

If seven churches are the complete Church in it’s various historical manifestations in the Church age, then the vision of the lamb with seven eyes, seven horns, and seven spirits is similar. Seven eyes would have something to do with complete vision, or omniscience.

Horns represent the power of kings (Daniel 8:21). In the KJV the horn of the “unicorn” is a symbol for great strength. The KJV translators did not know what a rhinoceros (or wild ox) was, so they simply translated the meaning of the Hebrew word for it. Numbers 23:22 and Psalm 93:10 use a horn to to describe the power of God, or the anointing of God. Kings in Israel were anointed with oil poured from a horn, see 1 Samuel 16:13. A king with seven horns would be a king of kings, a ruler with complete authority over the earth.

With this in mind, a beast with ten horns is a confederation of ten kings, but when a little horn rises to usurp three of them, he is the seventh horn, and a usurper. Jesus comes afterword wearing seven crowns, defeats the beast with a word from his mouth, and takes his rightful place as king of kings. Seven spirits would mean the Holy Spirit in his several manifestations.

Some commentators call Isaiah 11: 2-3 the seven-fold ministry of the Spirit. Speaking of Messiah, he writes,

The 1 Spirit of the Lord will rest on him—

the 2 Spirit of wisdom and of 3 understanding,

he will delight in the fear of the Lord.

Maybe it’s a stretch, but perhaps not. I think it safe to say that the seven spirits, mentioned four times in Revelation, point to the same meanings as the seventh day. By filling us we are finished, complete (one body), rest from the law of the flesh, and are sanctified to God, all works of His Spirit. Beyond this, He gives us a measure of wisdom, understanding, counsel, strength, knowledge, and teaches us to fear the Lord, which means to obey Him quickly, as we would a great King.

After this, there are seven seals, seven trumpets, seven bowls, and seven thunders. Although we cannot know in full what these things mean as they are yet future, we can know that the seventh of each thing finishes and completes the purpose of the other six. The judgements poured out are “to finish their rebellion, to put an end to their sin, to atone for their guilt, to bring in everlasting righteousness, to confirm the prophetic vision, and to anoint the Most Holy Place” (Daniel 9:24), all within seventy sevens from the time of the prophesy.

After this, the earth receives her seventh day of rest, the last of seven great world empires. The first was at the tower of Babel under Nimrod, the second was Egypt, the third Babylon, the fourth Persia, the fifth Greece, the sixth Rome with two legs and ten toes (or ten horns) in Nebuchadnezzar’s dream, and the seventh is the Kingdom of Heaven under Jesus Christ, the stone cut without hands that rolls down to destroy all the others and fill the earth.

There is additional structure to be found within the seven days of creation. In the first three days, God made three realms, or stages for the play of life: a realm of light and darkness (the spiritual world), the physical heaven and seas, and the land with its adornments. In the next three days, God made actors to fill each stage: heaven’s rulers on day four, birds and fish to fill the sky and sea on day five, and creatures of the land, including man, on day six. The seventh day was not like all the others, for He made nothing and rested. This is the pattern for all the sevens:

1-2-3 set the stage with the spiritual first, heaven next, and earth last

4-5-6 fills them with actors: angels, swarms, and individuals

If we look carefully, each seven originates in heaven, including things pertaining to the Church. We see sevens in heaven, seven angels in each round of judgment, seven churches (only here temporarily), seven deacons appointed in Acts, but reigning on the earth for 1000 years are the twelve apostles and twelve patriarchs, with twelve tribes occupying twelve divisions of land. Twelves are appointed upon the earth, but sevens belong to heaven.

The 24 elders that worship at the throne of the Lamb are the twelve patriarchs of Israel and the twelve apostles, after whom the twelve gates and twelve foundations of New Jerusalem are named. At the end of their song of worship they say,

“You have made us kings and priests to our God;

And we shall reign on the earth

Thus, bodies of twelve reign on the earth in the kingdom age, and not in heaven. Perhaps this explains why, when the elders sit upon 24 thrones in heaven, they immediately fall down and cast their crowns at the feet of Jesus.