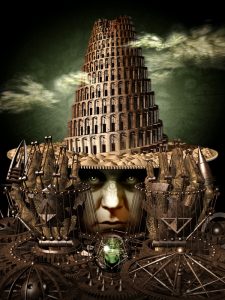 The curse upon human greatness is a story that is as sad as it is long. It reaches back in time beyond reliable historical sources, and stretches into the future of prophesy. The best commentary we have on it is found in the teaching of Jesus, but we will have to come to that later.

Talk about physically-great humans, or giants, is controversial today, but let’s face two facts: the Bible says they existed, and nothing written about them is favorable. Jewish tradition holds that many of the kings of OT peoples were giants, including Nimrod, who founded Babylon and it’s famous tower of Babel. Bab-el means, “Gateway to God.”

The Septuagint (LXX) OT in use at the time of Jesus introduces Nimrod thus:

“The sons of Ham were Cush, Mizraim, Put, and Canaan… Cush begot Nimrod; he began to be a giant on the earth. He was a giant, a hunter before the Lord God; therefore they would say, “As Nimrod the giant, the hunter before the Lord.” And the beginning of his kingdom was Babylon…” Genesis 10:6-10 LXX, part omitted

The Jewish sages said that he was a mighty hunter, clearing the lands he founded of fearsome beasts, but in time he became a hunter of men to follow him. One version of the story (from Josephus) says that Nimrod used tar for cement so that if God sent another flood upon the earth, his followers could enter into it and seal the doors to keep from drowning. Another version says he planned to use the tower to invade heaven with his army, to avenge mankind for the flood. His plan was to use the technology at his disposal to become a god.

Nimrod means “we rebel,” but the Jewish sages called him Amraphel, which means, “He that made men fall.” They gave the story of how a mere dozen opposed his decree that all the world should pay a tax of bricks to build the great tower or face his wrath. Japeth, Shem, Abraham, and Lot were among the refusers. Ham delivered three times the required number of bricks to appease the king and protect his brothers. In that day, making bricks for Nimrod was similar to receiving the mark of the beast in prophesy; it was an act of loyalty to God’s enemy that made anyone that participated fall under a curse.

This theme reprises in Exodus, when Pharaoh – who was worshipped in Egypt as a god – forces the Children of Israel to make bricks for the building of pagan temples and monuments. God’s deliverance from this was not only for the sake of his covenant with Abraham. It was also required by legal precedent, otherwise God could be called inconsistent in his judgements.

When Abraham took his 318 armed servants and pursued the kings that sacked Sodom and took Lot with the captives, Amraphel was one of the kings he slew. If Jewish tradition is correct, it  means that Abraham became a type of Christ when he overcame the first world ruler with a much smaller force, as when David slew Goliath. It’s no wonder that Melchizedik came out to meet him and praised God when Abraham returned with all the captives.

In the LXX version of the story, God overthrew the tower by confusing the languages of the 70 tribes described in the previous chapter. When they could no longer coordinate their efforts, they left it unfinished and moved their separate ways.

“They also said, ‘Come let us build ourselves a city and a tower, whose top will reach to heaven; and let us make a name for ourselves, lest we be scattered abroad over the  face of the whole earth.’ So the Lord scattered them abroad from there over the face of all the earth, and they ceased building the city and the tower.”

The theme of the cursed tower reprises in the rest of the Bible, because the story holds important spiritual lessons for believers. If we can accept it, this story is our story.

God commanded Noah and his sons to spread out and fill the earth as families, not to gather in one place and make a metropolis. They wanted to build a city, a tower, and a name for themselves. In Hebrew, a name is a person’s reputation or greatness. We all want to become great, leave a lasting legacy (monument), and to praise the achievements of others.

I should think about this when I dedicate my life to building great things at the cost of remaining little. When he became converted, Paul changed his name from that of a king to one that meant “small.” He was a pariah among his people, owned nothing, had no family, went nearly blind, and slept in more prisons than hotel rooms. But God used his smallness.

In the next blog we’ll take a look at some of the ways the Lord retells this story, so that when Jesus teaches the same things, we will have enough of a foundation to hear what he is actually saying, instead of what we want it to mean.