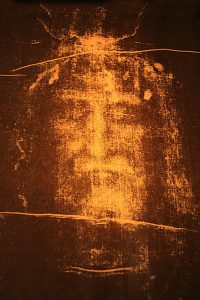 Sandra and I enjoyed the sunrise Easter service at a small church in our neighborhood in Nashville, TN today. I got a text message a little later on from my co-worker Evan, who was celebrating Easter with his parents. It contained a little-known custom that explains a seemingly non-trivial detail in John’s eyewitness account of the resurrection:

“Why did Jesus fold the linen burial cloth after His resurrection?

Then Simon Peter arrived and went inside. He also noticed the linen wrappings lying there, while the cloth that had covered Jesus’ head was folded up and lying to the side.

Was that important? Absolutely!

Is it really significant? Yes!

When the servant set the dinner table for the master, he made sure that it was exactly the way the master wanted it..

The servant would then know to clear the table. For in those days, the wadded napkin meant, ‘I’m done’.

But if the master got up from the table, and folded his napkin, and laid it beside his plate, the servant would not dare touch the table, because the folded napkin meant, ‘I’m coming back!'”

Thanks Evan, and Happy Resurrection Day!