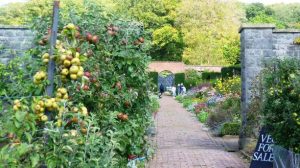 This is interesting because Paul lists exactly nine fruits of the Holy Spirit: love, joy, peace, patience, kindness, goodness, faithfulness, gentleness, and self-control (Galatians 5:22–23). There are many more than nine plants in a king’s garden, and many more than nine things the Spirit of God does, but it’s no coincidence that these two lists match, because it’s God speaking in both places.

If the Holy Spirit is in us, we will also have some of his fruit. The longer he is in us, the more mature the plants become that bear them, and the more fruit we will have. Let’s look at the fruit of the spirit list from Galatians and set it side-by-side with the fruits in Solomon’s garden.

Pomegranate is a red fruit that makes a tart red juice that, when mixed with wine, makes a marvelous drink the color of blood. Jesus demonstrated his love for us by shedding his blood. The seeds of this fruit even look like large drops of blood. The hem of the high priest’s robe was decorated with pomegranates and golden bells. Jesus is our high priest; he is dressed with pomegranates as symbols of his love. The pillars of the temple were also decorated with two hundred pomegranates around the tops. Paul says we are the temple; Jesus adorns us with the symbols of his love. Pom means “apple.” We are the apple of our Lord’s eye. Red still symbolizes love today: red hearts, red roses, red candy, red lipstick.

Henna is a fragrant white flower that grows in clusters. White represents purity, as in the white robes of the redeemed. This is the purity of Christ that covers us and produces joy in us even in difficulty and hardship. No one can take away a believer’s joy because no one can take us away from Jesus. Henna is made into camphor, a medicine used to waken a person who has fainted. When our hearts faint, Jesus is our camphor. The joy of knowing we are secure in him revives us.

Nard (NIV) or spikenard (KJV) is the perfume with which Jesus was anointed at a dinner in Simon the leper’s house at Bethany. Jesus said the woman who poured it on him anointed him for his burial. It is very costly to make nard. The peace Jesus has given us with God was also very costly! A medicine of it called valerian is still used today as a tranquilizer to calm people and help them sleep. Jesus is our nard who allows us to rest in peace with God. The passage lists nard twice for emphasis. Jesus also says it twice when he says, “Peace I leave with you; my peace I give you.”

Saffron means “yellow.” It is a flower from the crocus family. The stamens are used for making yellow dye, perfumes, and flavoring for food. Yellow is the color we associate with waiting. In August 1983, when Cory Aquino’s husband, Benigno “Ninoy” Aquino, was returning home from the United States to the Philippines, yellow ribbons were tied by his allies in Manila as a sign that they still believed in him as their elected leader to oppose the dictator Ferdinand Marcos. This sign was taken from the song “Tie a Yellow Ribbon Round the Old Oak Tree” in which a man getting out of prison asked his beloved to mark the old tree with a yellow ribbon if she was still waiting faithfully for him to return. Mature believers learn to wait on God. It leads to the next fruit.

Calamus is also called sweet flag or sweet cane, a sweet scent used in expensive perfumes and one of the ingredients of the holy anointing oil. Kindness must also be an ingredient in the character of the believer. The Lord expected sacrifices to have a pleasing (NIV) or sweet (KJV) odor. Paul said we are to present our bodies as a living sacrifice. God wants to see kindness in the sacrifices we make for him. Some teachers point to the anointing oil as symbolic of the anointing of the Holy Spirit. When a person shows kindness while others are attacking them, it is a clear sign that the person is being controlled by the Spirit of God.

Cinnamon is another ingredient of the holy anointing oil. It comes from the inner bark of the cinnamon tree. It has a sharp flavor and a clean aroma. It isn’t sweet, but mixes with sugar agreeably. Goodness is having the backbone to do the right thing when it isn’t easy or popular, but goodness by itself has the potential to make enemies of the very people we hope to bring to Jesus. When goodness and kindness are mingled, it inspires people and pleases God. Paul elsewhere points out that goodness without love is worthless.

Incense (NIV) or frankincense (KJV) is a dry, aromatic gum from a tree that grows in Arabia that gives off its odor freely (frankly) when burned, hence its name. It burns for a long time with a steady flame. It was unlawful in Israel to burn incense except for priests, and then only in the holy place of the temple twice daily. One day a year, on Yom Kippur, the high priest burned incense and went into the holy of holies, into the presence of the Lord and the Ark of the Covenant to sprinkle the blood of the sin offering onto the mercy seat. The purpose of the incense was to fill the apartment with smoke to keep the high priest from looking with too much curiosity on the ark and so die. While the incense was being offered, the worshippers outside offered their prayers, which ascended to the Lord with the sweet odor of the incense until the high priest returned and gave the blessing: “Your sins are forgiven, go in peace.” Jesus is our frankincense because he presents our prayers to God and bestows the blessing of forgiveness. As the smoke of the incense protected the high priest from the holiness of God, faith in Jesus conveys us safely into the presence of God, where we may address him “frankly” in prayer. Paul elsewhere compares faith to a shield. The Magi brought three gifts for the baby Jesus: gold for his kingship, incense for his high priesthood, and myrrh for his death as the Lamb of God.

Myrrh was a principal ingredient for making the holy anointing oil. Gentleness (NIV) or meekness (KJV) is translated from prautes, which has no true English equivalent. According to Aristotle, this word is the middle ground between two extremes, getting angry without reason, and not getting angry at all; it is anger under control. In the worldly sense, a gentleman is a man who controls his passions. In the spiritual sense, gentleness is an inward grace by which we accept God’s dealings with us as good and do not dispute or resist. To be gentle or meek means to deny selfish desires and do what is required of you. Esther was bathed in oil of myrrh for six months before she could be allowed into the presence of the king. She meekly went before the king to her probable death to save the lives of all Jews, foreshadowing Christ. Myrrh was used for embalming as one of the only perfumes strong enough to overcome the stench of death. It must be crushed to extract its potent odor. Jesus is our myrrh because he was “crushed for our iniquities” and overcame death itself by meekly going to the cross. Myrrh was used as a narcotic to numb the pain of crucifixion and hasten death, but Jesus refused it. He robs death of its sting better than a narcotic.

Aloe comes from either the juice or the hardened resin of an East Indian tree that yields a rich perfume, also called aloe wood, paradise wood, or eagle wood, of such rarity to be worth its weight in gold. It was used by Egyptians as a preservative for embalming. Nicodemus bought about a hundred pounds of aloe and myrrh for the burial of Jesus, a kingly gift. Solomon said self-control is easily worth more than gold and is just as rare. Paul said self-control acts as a preservative to keep believers from continually running back to their old sins. Jesus is our aloe, who preserves us through trials and temptations.

This article is an excerpt from my book, Kairos Letters, part of a larger study on the typology offered in each of the gardens in the Bible: Eden, Solomon’s, Gethsemane, the Garden Tomb, and the garden city of New Jerusalem. We discussed the last garden – the one that Jesus tends within our hearts – in earlier posts.