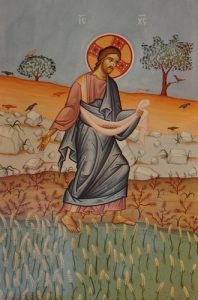 Jesus put forth dozens of parables, but there were seven in Matthew 13  that began, “The kingdom of heaven is like…” He gave a complete prophesy on the kingdom age in riddles! If you want to understand the structure of the Book of Revelation, you might as well start here.

At the end of the presentation, Jesus asked the Twelve if they understood all seven parables, and they replied that they did. How could they understand them, when the crowds by the lakeshore did not?

They understood because they knew the law of first mention. When Jesus explained the parable of the sower and of the weeds to them privately, it explained all the rest. If the man in the first parable was Jesus, the man in all the parables was Jesus. If the field was the world in one, then the field is the world in all. If birds are the evil one in the parable of the sower, they represent the same thing when they lodge in the branches of the mustard tree.

See how this works? Now we are having fun, because we know the key to the riddle is whatever meaning Jesus gave things in the first instance.

When a woman hides yeast in the flour bin, it is expressly not Jesus doing it, since he is the man in all the parables. Yeast represents inward evil in the Torah; she was corrupting the flour, a thing Jesus would not do. Whoever the woman is, she is someone in the kingdom age, doing something secretly, thus she “hides” the yeast in the flour when no one is watching. Will there be inward evil and hidden rebellion in the kingdom age? See for yourself in Psalm 2.

The Talmud in Berachos 17b states:

“Rabbi Alexandri, when he finished his daily prayer, said the following: ‘Master of the Universe, it is revealed and known to You that our true desire is to do Your will. What prevents it but the “yeast in the dough” (evil inclination) and the subjugation of the exile! May it be Your will, O Lord, to deliver us from their hands, and we shall return to perform the decrees of our will with a perfect heart’ “.

Going back to the law of first mention, we find yeast first in Genesis 19 when Abram asks Sarai to quickly take three measures of fine meal and make bread for their three visitors. The salient figures here are the three measures, the bread itself, the making of it in haste, and that there was no time for it to raise, making it unleavened. The word for unleavened bread (matzoh) and the word for commandment (mitzvah) has the same spelling in Old Hebrew because they left out the vowels. Making bread quickly without raising was equated with performing God’s commandments quickly. Allowing bread to raise was equated with being slow to perform one’s duty toward God, a hidden, yet corrupted condition of one’s heart.

The merchant “man” who traveled the world to find one pearl more valuable than all other pearls – has to be Jesus. He gave all he had for it. What did Jesus give everything he had for? Easy! The pearl must be his bride, the only thing valuable enough in the world for him to sacrifice everything to possess it. He searches the whole world to find her. He dresses her in white, like a pearl. Oysters aren’t kosher. The pearl or bride must be something other than kosher Israel – Jew and gentile together!

What are the pearl gates surrounding New Jerusalem? How does a person from earth enter in? By faith in Jesus, through the pearl doors of his bride! See how fun this is?

When “birds of the air” lodge in the branches of the mustard tree, is that good or bad? The first mention of scavenger birds is in Genesis 15:

So the Lord said to him, “Bring me a heifer, a goat and a ram, each three years old, along with a dove and a young pigeon.”

Abram brought all these to him, cut them in two and arranged the halves opposite each other; the birds, however, he did not cut in half.

Then birds of prey came down on the carcasses, but Abram drove them away.

As the sun was setting, Abram fell into a deep sleep, and a thick and dreadful darkness came over him.

Abram had to defend his sacrifice from them and drive them off. He fell into a dreadful trance afterward. Ever seen the size of turkey buzzards? They come in large numbers with many smaller birds. They could easily carry off a dove and young pigeon. In Torah, there are clean birds, and unclean birds. The ones that came to carry away his offering were unclean.

We see it again in the Chief Baker’s dream. In his dream he carried three baskets on his head, and in the topmost were all his delicious bakery items for Pharaoh’s table. Before he could deliver them, birds came down and ate his offering. The result was that he was not forgiven at the birthday feast as the Chief Cupbearer was. He was beheaded and hanged for the birds of prey to pick his skeleton clean. Flesh-eating birds were bad news.

In Jesus’ explanation of the parable of the sower, he says the birds are the evil one, who comes to snatch the good seed from the soil (or heart) that was packed down hard to make a path. This soil (or heart) did not accept the word quickly, and the birds got it. It is not enough to obey someday – we need to follow quickly when he calls.

When Jesus describes the kingdom age, at some point it becomes like a mustard tree, with birds in the branches. Suppose you have a garden, and it gets mustard growing in it. Do you let it grow tall? Of course not, you yank it out by the roots or it will destroy your garden! By the time a mustard plant is as tall as a tree, things are in bad shape. The birds of the air lodge in it. In the kingdom age, a time will come when the evil one will come to lodge in the Lord’s field again. See Revelation 20:

When the thousand years are over, Satan will be released from his prison and will go out to deceive the nations in the four corners of the earth—Gog and Magog—and to gather them for battle. In number they are like the sand on the seashore. They marched across the breadth of the earth and surrounded the camp of God’s people, the city he loves. But fire came down from heaven and devoured them.

If we go through the parables of Mt. 13, Jesus lays out the same things we read in prophesy about the kingdom age. When we follow the law of first mention, the visions, dreams and riddles in the Bible are considerably easier to understand.

For a more thorough group study on the kingdom parables,