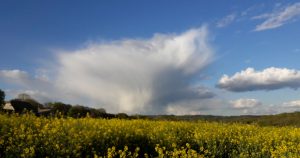 The first thing to know about types is that Jesus and many of the Bible writers used them, and when they did, they followed certain rules. Israel ordered the holy books by importance, starting with Torah (Genesis to Numbers), then the historical books, then the greater prophets, the lesser prophets, and finally “the writings.” According to this system, Torah – particularly Genesis – was the foundation on which everything else rested; the meaning of figures and symbols was taken from the time it was first mentioned in Torah. Some call this rule of interpretation the Law of First Mention.

The “Law of First Mention” is nowhere in the Bible, and yet it is there. In Numbers Chapter 12, Moses’ brother Aaron and sister Miriam spoke against him because he married an African woman. This was a clear violation of the Law, and they called him on it. The Lord commanded that Aaron and Miriam approach the tent of meeting to hear what He had to say about it from the pillar of cloud:

“When there is a prophet among you,

I, the Lord, reveal myself to them in visions,

I speak to them in dreams.

But this is not true of my servant Moses;

he is faithful in all my house.

With him I speak face to face,

clearly and not in riddles;

he sees the form of the Lord.

Why then were you not afraid

to speak against my servant Moses?”

The visions and dreams of Ezekiel and Daniel don’t interpret themselves, because the Lord said that he spoke to all the prophets in visions, dreams, and riddles, with the exception of Moses. Riddles! Can anyone solve a riddle that God puts forth? The only hope we have is to use the same meaning God assigns to things in the first instance, when he was speaking plainly, and not in riddles.

Go Deeper: The Kingdom Parables and Law of First Mention,