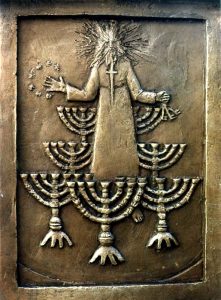 For example, NT readers already knew that seven lamps burned continually in the temple upon the menorah in the holy place near the altar of incense. They also knew that after the death and resurrection of our Lord, the Church became His new temple (1 Corinthians 3:16-17), the appointed place of worship for believers, whether Jew or Gentile. Every part of the Jewish temple is represented in some way by the Church.

The interesting feature for me is that John’s description of Christ in the Introduction contains elements that recur again in the letters to the churches, thus, the seven churches (or complete church) each show us something specific and different about Christ that – when taken together as a whole – describe him fully. No one church represents him completely, even if what they do represent is true and faithful.

From this, I gather that it is not possible to find a perfect, complete, or finished church, because the Lord has hidden different parts of himself in each one. At some point, we choose one or another church, put up with its problems and deficiencies, and give our all there anyway, like a married person does for an imperfect spouse. The Lord alone is perfect until the day we become like him (1 John 3:2).

The churches of Revelation are prophesy because the Introduction tells us the whole book is prophesy (Revelation 1:1), even if they were also real churches. In verse 11 Jesus tells John which churches to include in the prophesy. At the time, there were at least 20 churches in Asia Minor, so the selection of seven is noteworthy. As discussed in the previous post, seven = finished = complete = resting from works = blessed = sanctified (see Genesis 2:1-3), all conditions the Bible applies to the Church.

Seven also refers to things that belong to heaven and not to earth. Enoch, the seventh man from Adam, was not buried in the earth but taken up into heaven making him a prototype of the rapture of the Church. In his discourse on the laws of His kingdom (Matthew Chapters 5-7), Jesus told Jews that the meek among them would inherit the earth. The Church, however, inherits the Paradise of God (Revelation 2:7), and sits with Jesus upon his throne (Revelation 3:21). The New Jerusalem – Church included – comes down from heaven (Revelation 21:2), but not until after the 1000 year kingdom age and the new heaven and new earth appear. If they do not come down from heaven until then, the Paradise of God must be somewhere in the heavens until that time.