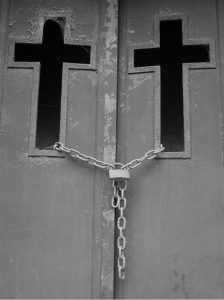 Laodicea is the seventh of seven churches in this revelation of the body and bride of Jesus Christ. Drawing from the typology of other sevens in the Bible, we have the seventh day that the Lord sanctified in which He rested, and seven as the number of completion or perfection. In the Bible perfect means complete, mature, or having nothing missing. It does not mean that the perfect one is incapable of wrong doing. Lucifer was described as “perfect in thy ways” before he fell in Is. 28:15.

To understand seven better, consider the meaning of eight. The eighth day is a new week. Hebrew boys are circumcised on the eighth day to represent being re-born as sons of the covenant God made with Abraham by circumcision. If eight is re-birth, then seven is the end of the previous life, or the “day of rest” to someone whose life is completed in death. Seven is holy, it is sanctified, it is complete, it is rest, and it is also a type of death in which one does no works.

When we come to the seventh church, we have come to the end of the church age. The church is no longer as vigorous and productive as she was in the prime of her life. She has the characteristics of an old person – set in her ways and unable to change – whether for better or for worse. Jesus tells this church He is the Amen, a word that means the end, or possibly the ender of all things.

No other person in scripture used the word Amen as much as Jesus did. Each time our translation says “Verily, verily, I say unto you” the original was “Amen, Amen.” Amen is the last word. To say amen is to say, “so be it,” or “Let it be unto me as thou sayest,” to use Mary’s phrase.

The prophets of the Lord would say, “thus saith the Lord,” and the teachers of the law said, “so it is written,” but Jesus was different in the way He taught. He said, “Amen, Amen,” – what I’m about to say is the Last Word, it is God speaking.

As prophesy then, the church of Laodicea comes at the end, at the completion of the church age, in it’s old age. Jesus comes to say “Amen” to it, and with that the earth passes into the events of the following chapters. Laodicea means “rule of the people.” When you are a King’s bride and family, it isn’t fitting to make the rules, but this is just what she is doing.

Jesus says, “you do not realize that you are wretched, pitiful, poor, blind and naked.” Ever visited people in a nursing home? Some of them were wealthy, but old age is the great equalizer. I have worked in nursing homes, and visited many, but it always left me feeling a little sad. A person who lives a full life must eventually part with everything he gained or made or controlled in this world.

Those whom I love I rebuke and discipline. So be earnest and repent. Here I am! I stand at the door and knock. If anyone hears my voice and opens the door, I will come in and eat with that person, and they with me. Rev. 3:19-20

Once again Jesus shows a door, but unlike the open door before Philadelphia, this one is closed and locked, with Jesus standing outside knocking. It chills me to realize that this is the door of the church, and we have locked Him out. What are we doing while He knocks? Why, we are holding church meetings in whatever way the people have decided is best. No one seems to ask Jesus how He wants anything done.

The world seeks unity by the processes of democracy, by electing representatives, and by holding assemblies of leaders to wrestle with divisive questions and vote on them, but the kingdom of God is not a democracy, nor is it ruled by the people. If Jesus was in the church and not outside the door, would we ordain gay and lesbian clergy? Would we vote on every matter of doctrine?

We would not. We would kneel at Jesus’ feet and not even bring up the questions. We would bow down and worship, and keep our peace about many things that occupy our churches today. We would repent in sackcloth and ashes, and wait for our Lord to say how he wants everything done.

And if any of us in Laodicea hear His voice and open this door, Jesus says He will come in and eat the Passover lamb, the unleavened bread of his body, and the wine of his blood with us as He did with his apostles, way back in Ephesus.