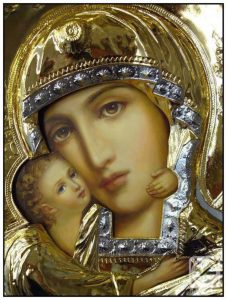 Pergamos (or Pergamum) is a compound of per + gamy, which means mixed marriage. “Per-” is also the root of perversion, which Jews define as mixing the holy with the profane. As prophesy, the letter to Pergamos addresses the next part of the Church age in which the holy Church became married to the unholy Roman Empire under Constantine and those who followed after, beginning at 300 AD.

The traditions of this church period have been carefully preserved and remain in the Body of Christ today in Eastern Orthodoxy, consisting of Orthodox, Oriental, and Assyrian branches, together with certain parts of the Catholic Church that communicate with Rome but hold to the Eastern liturgy.

As the Christian “way” was at first accepted, and later supported by governmental power, it began to replace pagan temples with beautiful places of worship and took on some of the functions of the pagan calendar and life. This was done intentionally for good purposes while maintaining fidelity to Jesus and the New Testament at the same time. We see this sort of thing in marriages between spouses of different beliefs in the way they raise children with the best of both traditions.

It was not difficult for previously-pagan peoples to replace the mother-son cult of Ashtoreth and Baal with images of Mary and Jesus. Ashtoreth was the Hebrew name for Ishtar, which was Phoenician for the Babylonian Semiramus. She was the wife of Nimrod from Genesis. Nimrod, also called Amraphel (he that makes men fall) in Jewish writing, was slain by the hand of Abraham when he rescued Lot and the inhabitants of Sodom at the slaughter of the kings. Genesis leaves out some of the details, but they are there in the Talmud. The son of Semiramus was Tammuz – later called Baal – which means Lord.

With this in mind as the pattern, let’s take a look at what Jesus writes to this church.

“These things says He who has the sharp two-edged sword: I know your works, and where you dwell, where Satan’s throne is.”

I think it unusual for a lord to approach his servant with a sharp sword, much less his bride, but Abraham went with 318 armed servants to redeem Lot by killing Amraphel and the kings of Syria, Turkey, and Assyria with the sword. Jesus brings a sword to redeem his Pergamos church from its bondage to the pagan Roman Empire. He praises them for holding fast to his name through persecution and then adds,

“But I have a few things against you, because you have those who hold the doctrine of Balaam, who taught Balak to put a stumbling block before the children of Israel, to eat things sacrificed to idols, and to commit sexual immorality.”

Balaam was a famous Mesopotamian prophet that lived at the same time as Moses. In the Talmud, we learn that the pagan kings of the land complained to the Lord that He showed favortism to the Israelites by speaking with Moses face to face. To prove that the accusation was baseless, the Lord also spoke face to face with Balaam, a pagan prophet.

When the Israelites left Mt. Sinai and traveled up toward Canaan, they camped in the land of Moab. Remember that Moab and Ammon were Lot’s two sons. Balak was King of Moab, and did not want them there, but he was also afraid to attack the Israelites because they were numerous, and the Lord protected them with his pillar of cloud. All the kings knew what happened to Pharaoh and his army.

Balak hired the pagan prophet Balaam to speak to the Lord and curse Israel. Each time Balaam tried to do so, only blessing for Israel came from his mouth. We learn later on that Balaam came up with a sinister plan to help Balak bring a curse upon the Israelites. He took unmarried young women from one of the Midianite clans that lived in Moab, and caused them to dance naked before the idol of Baal that he set up on the heights of Beth Peor within view of the Israelite camp below. They sacrificed animals and roasted the meat, beat upon drums and danced until the young men of Israel smelled the meat and left their pots of manna to check out the party. Many of them returned to camp the next day with Midianite wives. This angered the Lord, and he sent a pestilence into the camp that killed thousands of them, without Balak having to lose even one fighting man. The men of the tribe of Levi rose up with Moses to put a stop to it when they took up swords and killed all the unfaithful men and their pagan wives to restore Israel’s purity.

Jesus brings all this to mind in very few words by mentioning the names Balak and Balaam in connection with the two-edged sword. It angers the Lord when we imitate the pagan world, and bring what pagans do with us into his Church. The Lord refers to this as spiritual adultery throughout the Old Testament.

“Thus…” means that Jesus is now ready to tell us whom they committed sexual immorality with.

“Thus, you also have those who hold the doctrine of the Nicolaitans, which thing I hate. Repent, or else I will come to you quickly, and fight against them [not you] with the sword of My mouth.”

Jesus reiterated what the apostles declared in Acts 15:20 about former pagan believers in Christ abstaining from meat sacrificed to idols and from sexual immorality, but he also compares those things to what the Nicolaitans were doing, and calls them to repentance so that He would not be forced to use his sword to separate them from being unequally yoked to pagan practices. What did the Nicolaitans teach?