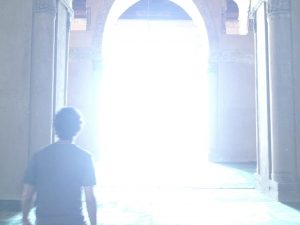 Philadelphia is the sixth church in a series of seven, so we may draw correspondences from the sixth day of creation in which the Lord made the inhabitants of the land. According to Jewish tradition, He made the animals in the first part of the day (evening), and created Adam at sunrise. Adam spent that morning naming the animals – and seeing that each had a mate except himself. In the afternoon, God put Adam to sleep and made Eve from the rib underneath his heart. Adam and Jesus each had a wound in the left side.

Solomon constructed an ivory throne overlaid with gold that had six steps fastened to it, with lions flanking it. Revelation also calls six the “number of a man.” Whatever other correspondences there are, at the least we have the Day of man, the wounding of the man as the cost of obtaining a wife, and the preeminence upon the earth of the Son of Man – a tile Solomon and Jesus both used.

Philadelphia means “city of brotherly love.” Jesus approaches this church by showing an open door. In the history of man there has been no such city – a place where all men were welcome to enter – with the exception of Christ’s Ekklesia.

Later in Rev. Chapter 4 John sees a door into heaven. Commentators disagree about this, but I think it is the same door Jesus mentions in the letter to Philadelphia. Jesus is the door of the sheepfold. When a person enters the Ekklesia of Christ, he has entered the door to heaven and the New Jerusalem at the same time. The heavenly city has twelve gates that are pearls, a type of the Church in that they are living gemstones, formed in the pain of the oyster’s irritation, polished white, and oyster is a non-kosher animal, indicating the Gentile church. Jews are included in the Ekklesia when they become a “new creation,” the same as Gentiles are.

Philadelphia’s open door stands in stark contrast to the door Jesus shows to the Church in Laodicea, shut and locked with Jesus outside, knocking. More on this in the next post. As prophesy, the Philadelphia church represents the “open door” of the great missionary movements following the Protestant Reformation. I think many of our parents, grandparents, and great-grandparents were a part of it.

Within the missionary, or evangelical movement, Jesus says there is a synagogue of Satan. They claim to be Jews, but know they are not, making them liars. In this same period of church history we see the rise of “replacement theology,” or the idea that the Church has replaced Israel. Prominent among these are Mormons and Jehovah’s Witnesses, but they are joined by other groups that say that they alone are the true church, the spiritual Israel, and are the only ones going to heaven.

Mormons make replacement teaching prominent by appointing men as “Patriarchs” to lay hands on their youth and declare by prophesy which of the twelve tribes they belong to. They also say that baptized Mormons are the only ones who will be admitted into the Celestial Kingdom, closing the door on others. Jesus does not say that He will send the synagogue of Satan to hell. He says He will make them kneel at the feet of the open door church and admit that He also loved and died for her. On the basis of this, I don’t think that the Christian cults are destined for hell.

How high is the bar for salvation? Not very high: “whosoever calls upon the name of the Lord” is pretty inclusive. Do I consider the Christian cults my brothers in Jesus? Yes, I do. Fortunately for us all, the basis for our salvation is Jesus, plus nothing.

The last part of this letter has Jesus saying,

“Because you have kept My command to persevere, I also will keep you from the hour of trial which shall come upon the whole world, to test those who dwell on the earth. Behold, I am coming quickly! Hold fast what you have, that no one may take your crown.” Rev. 3:10-11 NKJV

Is there a difference between keeping them from the trial vs. keeping them from the hour of trial? I think there is. The trial that will come upon the whole world is described in the following chapters of the Book of Revelation, starting with Chapter 6. How do you keep someone from the hour of trial? By removing them from time. This sounds like what Paul said in Thessalonians about the trumpet of God blowing and the snatching away of the Church to heaven. If this is the case, then when does it come? After the Gospel has been preached to the world by the missionary church of Philadelphia, but before the great tribulation comes.

“After these things I looked, and behold, a door standing open in heaven. And the first voice which I heard was like a trumpet speaking with me, saying, “Come up here, and I will show you things which must take place after this.” Immediately I was in the Spirit; and behold, a throne set in heaven, and One sat on the throne.”

John is looking up at heaven, sees a door open, hears a voice like a trumpet, and immediately he is outside of time, gazing at the One seated upon heaven’s throne. John is part of the Church. Could it be that he is describing the rapture? I think he is – not like an observer who sees millions of people suddenly depart – but as the one being raptured. If the church is one body, then when John is raptured, we’re all raptured.

In the following chapters, the horses of the apocalypse go out to bring the trial that will come upon the whole world, but after Rev. 4:1 the Ekklesia or Church isn’t mentioned again on the earth until after the 1000 years when New Jerusalem comes down from heaven adorned as the Bride. None of it makes sense if you say the Church replaced Israel, for Israel does remain upon the earth forever – and is never mentioned in heaven at all.