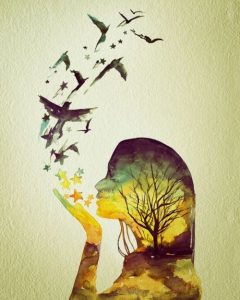 Sardis is the fifth church in this series of seven. In the archetype associated with the number five, we have the fifth day of creation in which the Lord populated the regions below the earth (the seas) and above the earth (the visible sky) with swarms of fish and birds. Since man was not granted permission to eat meat until the covenant with Noah, their original purpose was not for commerce or food, by selling and killing them.

Indeed, when Adam received lordship over the earth, he was commanded to rule over the other living creatures, presumably so that they would have the advantages of intelligent government and so live – not wild, by the law of the jungle – but tame under the law of man. The swarms of believers that make up the Church are also not for buying and selling, nor to be left without life-giving leadership to return to our “natural” ways of doing things.

A second figure associated with the number five is the fifth letter in the Hebrew alphabet, Heh. This is the letter of breath, or the gift of life within all living creatures. A third association are the five books of the law (Torah) that were to govern Israel.

Whatever other associations there may be with the number five, at the least we have the breath of life, swarms of living things in the seas and skies, man’s government over living things, and the Lord’s revealed word for governing man.

As prophesy, this letter follows after the one that I associated with the Roman Catholic Church, making the church at Sardis a type of the Protestant reformation. “Sardus” is thought to mean a blood-red gemstone that was often carried or worn by soldiers in the Roman army as a talisman to grant them ferocity in battle. The Protestant reformation was the first historical period when state-sponsored armies of believers formed to make war upon and kill one another. As hard as it is to imagine this, it happened 500 years ago and lasted for many generations.

With all these images in mind, let’s take a look at the letter to Sardis. Jesus writes,

These things says He who has the seven Spirits of God, and the seven stars: “I know your works, that you have a name that you are alive, but you are dead…”

If seven means complete and holy – as discussed in previous posts – then the seven Spirits of God means the Holy Spirit in completeness, with no part of it’s ministry missing. Unlike the letters in which Jesus approaches his bride with a sword or with burning eyes, he corrects this church by holding up the Holy Spirit and the angels of the churches.

I don’t agree with commentaries that make the angels of the seven churches their human leaders or pastors. If Jesus meant that, why not call them elders or pastors? I think when Jesus says angels, he means angels sent to watch over and protect each of the seven church movements. In Daniel 9 and 10 Gabriel was sent with a message to Daniel, but said he was withstood (and delayed) by the prince of the Persian kingdom for 21 days until Michael the archangel came to help him. From this we know Satan has appointed princes of the fallen angels to corrupt the world’s empires (Paul named them “principalities…powers…rulers of the darkness of this world…in high places” – Ephesians 6). It should not surprise us then that the Lord appoints holy angels to watch and protect Israel or his seven churches from the enemy.

The issue for the church at Sardis is the claim to having the breath of God empowering it – all of the gifts and manifestations of the Holy Spirit – when it doesn’t. Much of this movement teaches that the sign gifts of the early church are no more. How long has it been since we have seen miracles of healing, or of translation, or confession, or of prophesy in this church? Sardis has the Bible, but no power; a doctrine, but no better government than the world has, where the body votes to make decisions.

Oil is used throughout the Bible as a type of the anointing of the Holy Spirit. All the apostles received the Holy Spirit (John 20:22) when Jesus breathed the Heh, or the breath of life into them, but the fullness of the seven Spirits of God were not manifest in their lives until Pentecost, when tongues of fire came down and rested upon them.

Here is the picture: the Church of Sardis is one of the seven candlesticks. The Light of the World (Jesus) is only visible from the candlesticks as long as the oil in it is replenished daily. When the oil in the lamp runs dry, the light goes out and the Lord comes “as a thief, and [they] do not know what hour [Jesus will] come upon you.” The door to the wedding feast closes while five of the saved believers do not yet have the complete ministry of the Holy Spirit. They tell one another that they must go to the marketplace and “buy” it, but it cannot be bought after darkness falls.

Is it the fault of believers that their church has died? Five has to do with the government over those given the breath of life. The Protestant reformation may have been necessary, but it did not go far enough. Jesus says,

“Strengthen the things which remain, that are ready to die, for I have not found your works perfect [i.e. complete] before God.”

Something necessary to our life in Jesus was missing, as men bought and sold us by the millions to make their living and to expand their names and ministries across the earth.

Go Deeper: Making a Living from the Flocks and Schools of Believers, Click Here