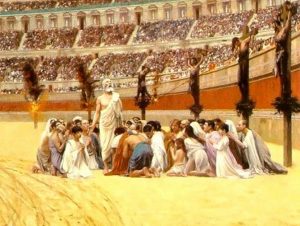 If you missed the Introduction to this series, we have been looking at “sevens” in the Bible, using the first instance of the seven days of creation to set the stage for other sevens, such as the seven churches of Revelation. If the Bible has only one Author, and if He is God, then we would expect His use of figures like this to remain constant in what they mean. This is how my teachers have taught me to make sense of prophesy.

In the second day of creation, God made the heavens and seas. These set boundaries for man, as we can neither fly through the air nor breathe under water without machines to keep us aloft or alive. Smyrna means “city of myrrh,” the precious oil used as perfume for burial to cover the stench of death. God placed a boundary around the life of man, giving him only so much time before he must face his Maker to give an account of his years on the earth.

“And to the angel of the church in Smyrna write, ‘These things says the First and the Last, who was dead and came to life: I know your works, tribulation, and poverty (but you are rich); and I know the blasphemy of those who say they are Jews and are not, but are a synagogue of Satan. Do not fear any of those things which you are about to suffer. Indeed, the devil is about to throw some of you into prison, that you may be tested, and you will have tribulation ten days. Be faithful unto death, and I will give you the crown of life.”

As prophesy, Smyrna appears to reflect the persecuted Church, first under zealous Judaizers that followed behind Paul, demanding that they observe the Mosaic Law and become circumcised to make them Jews, and later under ten Roman emperors who tried to extinguish it: Nero, Domitian, Trajan, Marcus Aurelius, Septimus, Maximus, Decius, Valerian, Aurelian, and Diocletian. If this view is correct it anticipates Church history from AD 54-305, however portions of the Church have always been persecuted. The second letter is another example of prophesy as pattern with recurrences.

The Lord encourages our persecuted brethren by saying He sees what men do to them, but they are already rich beyond the wildest dreams of those who have taken away what little they had in the world. They will receive the crown of life, while their enemies will get the penalty for treason against God. He also offers them purpose in suffering, saying that He allows it so that we may be tested.

Go Deeper: Why Does God Allow the Faithful to Suffer?