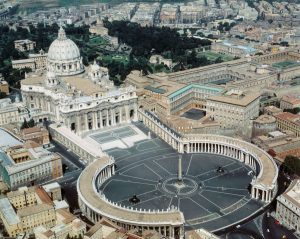 Thyatira is the fourth church of seven, corresponding with day four of creation. On day one the Lord created the spiritual realm of light and darkness. On day two, the heavens and seas as boundaries above and below the habitation of man. On day three, the land with its adornments as a stage for the play of life. On day four He made luminaries to fill and populate the realm of light and darkness and to function as heavenly rulers of the day and night. Since evening and morning were the fourth day, the moon and stars appeared first with the sun afterward.

Bear in mind, then, that heavenly bodies are fitting symbols for the fourth church in Revelation. Thyatira was named for the Hittite version of the mother goddess. She is variously represented with a three- to eight-pointed star about her head similar in appearance to our statue of liberty, or with the moon resting upon her head. Her son Baal-Tammuz (Yule) was the sun god, that “died” at the winter solstice each year and was re-born a week or so later at the celebration of the new year. Europeans celebrated this by burning the Yule log on the eve of the solstice, and by replacing it with a decorated sapling to symbolize his re-birth. Although the Bible does not give a specific birthday for Jesus, the Church chose this time of year to celebrate Christmas.

As prophesy, the fourth church follows the Constantine period, predicting the firm establishment of church government in Rome after the 1204 AD fall of Constantinople. The heritage associated with the Thyatira Church remains with the body of believers today as the Roman Catholic Church.

When a man speaks to his bride with eyes like a flame of fire, it usually indicates jealousy. His feet like glowing brass speak of the brass altar, the place of sacrifice where the fire of God’s judgement of sin was never permitted to go out, whether night or day. He has much good to say of this church, and some things that he wanted her to change.

One of the Lord’s complaints was a comparison of Thyatira with Jezebel from the OT. Jezebel was the Daughter of EthBaal, King of Tyre and Sidon. Ezekiel 28 compares his dynasty’s fall to Satan’s fall. Jezebel married King Ahab to cement an alliance between weak Israel and powerful Phoenicia, but by royal birth she was the High Priestess of Baal, so her court included the 450 prophets of Baal and 400 priestesses of Asherah. These orders for men and women practiced ritual prostitution and divination.

Divination is prophesy by ritual means, with the implied assumption that the outcome of the authorized practitioner’s ritual is guided by a god. The institutionalization of the mother-son cult (Mary as an intermediary for Jesus) and public ritual into Christian worship may be part what Jesus implies by this comparison. Jezebel established state priesthoods in Israel, using Ahab’s authority to enforce it by killing any prophets of the Lord she found. She replaced God’s chosen representatives with worldly ones, backed by the power of the state and kept in public favor by their religious clothing, sanctioned prostitution, and public rituals.

I am not here to “bash” any part of the Lord’s bride, because we are all one body. The sickness that afflicts any of our parts has weakened us all. I write about this because I am greatly comforted to know that Jesus predicted everything that has happened in his Church from the beginning, and in the end our sickness and shame will not matter. He holds the angels of all the churches in his right hand, and no one can take us from him.

Without each church, problems and all, we would not have the saving knowledge of Jesus with us today. If the Church or Eklesia itself is in need of confession, repentance, and improvement in every stage of development, than I need those things in every stage of my development also.