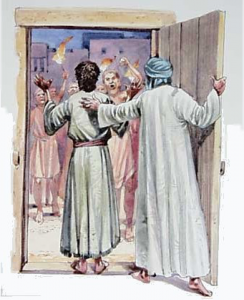 I’d like to think about individuals in the Bible that became a gate or a door for someone else. Jesus says,

“Verily, verily, I say unto you, I am the door of the sheep. All that ever came before me are thieves and robbers: but the sheep did not hear them. I am the door: by me if any man enter in, he shall be saved, and go in and out, and find pasture.” – John 10:7-9

John was penned in Greek, but the Hebrew word the type is based upon is Strong’s 8179 sha’ar, an opening, from 8176 sha’ar, to split or open, or to act as gatekeeper. This word is related to 7778 show’er, a janitor or gatekeeper.

The first appearance of sha’ar in the OT goes like this:

And there came two angels to Sodom at even; and Lot sat in the gate of Sodom: and Lot seeing them rose up to meet them; and he bowed himself with his face toward the ground;

And he said, Behold now, my lords, turn in, I pray you, into your servant’s house, and tarry all night, and wash your feet, and ye shall rise up early, and go on your ways.” – Genesis 19:1-2

The first person associated with sha’ar – a door or gate – is Lot. In this terrifying account, Lot reveals that he has the Spirit of God when he recognizes the men as angels and bows before them, calling them lords, just as Abraham did in the previous chapter. Lot is a sanctified man in a wicked city.

The angels were there to witness the debauchery of the Sodomites in person, but because Lot had favor with God by his association with Abraham, they defer to his pleading to enter his home, where he bars the door and prepares a feast for them.

Before long, the Sodomites come to Lot’s house demanding he give them his guests. Lot slips outside and stands between them and his door to reason with them. In that moment, Lot becomes the door the wicked must pass through to see heavenly things, but he does not open to them.

They call him a newcomer who has made himself a judge. It is true that after Abraham slew the kings of Mesopotamia for Lot’s sake, and delivered the captives of Sodom back to their king, Lot became an elder of the city. He sat at the city gate with the other elders to settle disputes.

Lot emulates Abraham at this point when he offers to sacrifice his daughters, but as with Abraham and Isaac, his daughters are spared by the intervention of the angels. This is the best interpretation of the story I can find, as 2 Peter 2:7 calls him “righteous Lot, vexed with the filthy conversation of the wicked.”

In the morning, the angels hurry him away from Sodom so they can destroy the city with heavenly fireballs. His sons-in-law will not listen to him, so he takes his two remaining daughters and wife and flees the city. So near were they to the destruction, that Lot’s wife didn’t make it. Lot was raptured by angels from the destruction of Sodom in the nick of time.

Lot is a type of the church in several ways. He was the son of Abraham’s brother Nahor, but after Nahor died, Abraham treated Lot like a son. Lot was adopted into Abraham’s family, just like we were.

The angels deferred to Lot’s judgement of their plan to spend the night in the city square. 1 Cor. 6:3 says, “do you not know that we will judge angels?”

Lot was raptured out of Sodom and the Jordan Plain by angels before it was destroyed and became the Dead Sea, just like we will be raptured from the destruction of this world at the end of the age.

Even though there are things we read in Lot’s story that are disgusting, the New Testament declares him righteous, just like us.

Finally, Lot’s oldest son was Moab, who was the progenitor of Ruth. We’ll take a look at the door in her life in the next part of this series.