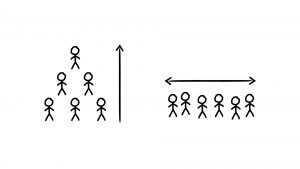 The mention of the Nicolaitans in the letters to Ephesus and Pergamum seems to baffle historians, but if we translate the word it removes the difficulty. Nica’o means to rule over, and the rest of the word means the laity, or common members of the Church. The nicolaitans wanted to impose a top-down hierarchy of Church leadership with a regulated priesthood, offices, orders, heads of congregations, heads of heads, and so forth. This was foreign to the early church.

Jesus commends Ephesus for resisting this heresy, but when we come to Pergamum, He writes, “Thus you also have those who hold to the doctrine of the Nicolaitans, which thing I hate.”

For a thoughtful, scriptural treatment on the subject of hierarchy in the Church, I recommend Richard Jacobson’s book, Unchurching. For a quick introduction, check out his animations at https://www.youtube.com/user/ChurchAnarchist/videos. He uses the term “Church Anarchist” (i.e. against hierarchy) humorously, because long study of the New Testament led him to step down from being a Senior Pastor on salary to learn what it means to live as an equal with fellow-believers under the headship of Christ.

To give his arguments in brief, we have Jesus saying:

And we have Peter, the recognized leader of the Church after Christ ascended, saying,

The elders who are among you I exhort, I who am a fellow elder and a witness of of the sufferings of Christ, and also a partaker of the glory that will be revealed: Shepherd the flock of God which is among you, serving as overseers, not by compulsion but willingly, not for dishonest gain but eagerly; nor as being lords over those entrusted to you, but being examples to the flock; and when the Chief Shepherd appears, you will receive the  crown of glory that does not fade away. Likewise, you younger people, submit yourselves to your elders. Yes, all of you be submissive to one another, and be clothed with humility, for “God resists the proud, but gives grace to the humble.” Therefore humble yourselves under the mighty hand of God, that He may exalt you in due time, casting all your care upon Him, for He cares for you.

Peter first rejects hierarchy by making himself an equal with the elders to whom he writes. He defines the pastor (a word that means shepherd) as an elder, and vice versa. Some translations use “bishop” but that word also means a servant who watches the sheep. There is no indication that a pastor or bishop is higher than an elder, or that he, the apostle and “fellow elder” is above them. They are equals under Christ, period.

The elders were to watch over the flock of God like shepherds. Shepherds watched over valuable livestock for their masters and had about the lowest occupation there was, being slaves and not owners (“lords” means owners) of the flock. They were not in it as a career with a degree, certificate of ordination, and salary.

Peter emphasizes the same mutual submission of all believers here that Paul applied to married couples in Ephesians 5:21 and following. The Church is not to conduct itself in the way a corporation or empire does. We are a family, and we submit to one another, following the example of our elders or parents in the faith.

Can a woman be an elder? This becomes easier to answer if we see the Church as a family and not as a 501(c)(3) corporation under the US Internal Revenue Code. Can a woman be a parent? Of course she can! Her role in the Church is comparable. Paul called Phoebe a deaconess in Romans 16:1-2, but the word deacon just means a servant, which is the same thing Peter said the elders and shepherds were. Bishop, pastor, elder, and deacon are all servants practicing mutual submission under the headship of Christ:

If Christ is the head of every man, he is my direct supervisor, no matter what name for “servant” I take. So the question of a woman being a fellow servant of Christ to the Church (e.g. a deaconess), or a spiritual parent to younger women (an “elderess,” if you will, see Titus 2:1-5), is not to be viewed as a position of authority in a corporation, but as a married act of love to Christ by keeping watch over his little ones, so they don’t become lost or stray away from him.

Mutual submission means we don’t make anyone higher or lower. A woman does not exercise authority over her husband, nor anyone else. She makes herself a servant and watches over the children and younger sisters. If you want to make her a deaconess or elderess, go ahead, it makes no difference what you call her. Should she give sermons on Sunday morning? We are missing the point. She should make herself a servant and not elevate herself.

Should a man become a Senior Pastor, with a salary and authority in the Church? Go back and read Matthew 20:25-27 again, and ask our Chief Shepherd what he means.

Does a man have authority over his wife? My Bible says he is to serve and care for her as a head serves the body it is yoked with, or as Christ gave himself for the Church (Ephesians 5:22-33). When he sacrifices his own desires and life for her benefit, he understands his role as a husband – or as Christ’s slave.