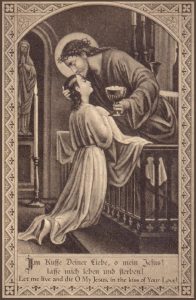 It seems like a ridiculous question – or it would have when I was a child in the 1960’s, but today the celebration of our Lord’s Supper is taking a back seat to other forms of worship in a large part of the Body of Christ.

I love to visit Christian churches of all kinds, and I love experiencing the great diversity of worship among us. In some places, the communion service is a rare event, being offered quarterly, or but once a year. In others, it’s set out as a self-serve kiosk at the back of the room, where I must enjoy my “communion” with all my fellow-believers down the ages, completely alone.

So I ask, Why take communion at all?

Our word for this sacrifice is a compound of common + union. It is a coming together of everyone on an equal basis, as one body – the Body of Christ. Paul describes us as Christ’s body in some instances, or as his wife in others. When we think about the act of marital communion, what it means and what it produces, it seems like something we should be engaging in as often as we come together. How do you think your spouse would react if you announced that from now on, marital communion services in your home will be scheduled on every fifth Sunday?

The longer I walk with fellow Protestants, Pentecostals, and Evangelicals, the more deeply I feel that we left something important behind in the Orthodox, Roman, and Episcopal traditions of earlier generations. I’m not saying that they are right and we are wrong. I think each part of the Body of Christ does important things, like the eyes, or hands, or mouth in a human body.

In Christ’s letter to the Church at Ephesus, he said, “You have forsaken the love you had at first. Consider how far you have fallen! Repent and do the things you did at first.” What things did the churches do at first? They met in homes, offered hospitality, and had communion as a part of a love feast when they came together. It wasn’t the meeting of a corporation, and it wasn’t a gospel rock concert. It was family having a meal together, and the best part of the meal was Jesus.

Even after writing a seventeen-chapter book about communion, I feel that I barely scratched the surface of what is there for believers. The deeper question is, “How close to Jesus do I want to be?” You can’t get any closer to someone than being married, in communion. Why would the organized church set communion with Jesus aside for special, rare occasions instead of offering it as often as we eat together, or worship? Do we only want to get that close to him on special occasions? Are we afraid to lose ourselves in him?

There is a spiritual aspect to the Lord’s Supper that defies any attempt to explain it. Do you need healing? Jesus has it. If just touching the hem of his garment healed the woman with an issue of blood for twelve years, after all the doctors failed, how much more effective would it be to eat his body and drink his blood? Think about the things that are used to make drugs, and how much more effective it would be to take Jesus into our body – in faith that it’s really Him – and not just a metaphor!

With each church that I visit, I wonder: “Will we be offered the body and blood of our Lord today?” Maybe I should become Catholic, but what I really desire is Jesus.