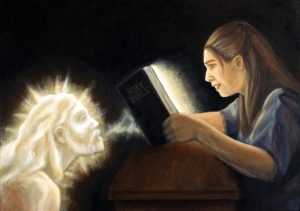 The Bible is not like other books, because the Author distilled infinity into the finite writing. Most of it points directly to Jesus, but some of it touches on the destiny of the world and Israel, or on the “third rail” of scripture – the Bride. When details in the text line-up prophetically, it isn’t by coincidence.

Knowing the end from the beginning, Holy Spirit either dictated or omitted every name, number, place, and detail in each story to correspond with events in the greater story of our redemption. We can sometimes learn as much from what’s left out as from what’s stated. When scripture is ambiguous, it was given that way purposefully to carry more than one level of meaning.

The Spirit used different ways to instill infinity into the writing. For example, many words in Hebrew have more than one meaning. If we look carefully at alternate meanings, they reveal puns and mysteries that are not fully explained until we come to the New Testament.

The human writers could not have known the full meaning of anything they wrote, for it’s only in hindsight that prophesy becomes plain. No one understood this better than the prophet Isaiah:

I foretold the former things long ago,
my mouth announced them and I made them known;
then suddenly I acted, and they came to pass.

For I knew how stubborn you were;
your neck muscles were iron,
your forehead was bronze.

Therefore I told you these things long ago;
before they happened I announced them to you
so that you could not say,
‘My images brought them about;
my wooden image and metal god ordained them.’
You have heard these things; look at them all.
Will you not admit them?

“From now on I will tell you of new things,
of hidden things unknown to you.
They are created now, and not long ago;
you have not heard of them before today.
So you cannot say,
‘Yes, I knew of them.’

You have neither heard nor understood;
from of old your ears have not been open.
(Isaiah 48:3-8a NIV)

If that isn’t enough, Jesus sometimes quotes Old Testament passages out-of-context, defying our usual rules for interpretation. See what Jesus says in John 10:34 about the “Ye are gods” passage from Psalm 82:6 in his defense against those accusing him of blasphemy. In context, the word for “gods” meant a judge, but he reverts to the literal meaning when he quotes it.

Jesus allows the words of scripture to mean more than what they meant in the original context, because they convey truth about Him that extends far beyond the context.

Trained Rabbis understand this, and sometimes say that scripture must be understood on at least three levels:

The first is the plain meaning of the writing for the time and audience. Our usual methods of exegesis bring this meaning out, and we should consider it the first and most important, but not the only meaning of scripture as we seek to understand it.

The second takes a deeper look, because prophesy is hidden in plain sight. The Lord said:

“When there is a prophet among you,
I, the Lord, reveal myself to them in visions,
I speak to them in dreams.
But this is not true of my servant Moses;
he is faithful in all my house.
With him I speak face to face,
clearly and not in riddles;
he sees the form of the Lord.
Why then were you not afraid
to speak against my servant Moses?”
(Numbers 12:6-8 NIV)

Here the Lord tells us that when he spoke to Moses he used plain language, but with the prophets after him he spoke in visions, dreams, and riddles!

So there is more to understanding scripture than the contextual meaning. There is prophesy hidden in the meaning of names, in words that have double meanings, in what is stated, implied, or excluded, and in the way OT passages quoted in the NT give new meanings.

It is the glory of God to conceal a matter;
to search out a matter is the glory of kings.
As the heavens are high and the earth is deep,
so the hearts of kings are unsearchable.
(Prov 25:2-3)

This saying seemingly leaves us common folk off the hook, until Peter writes:

But you are a chosen people, a royal priesthood, a holy nation, a people belonging to God, that you may declare the praises of him who called you out of darkness into his wonderful light.
(1 Peter 2:9 NIV)

So it is the glory of kings to search out a matter that God has concealed in his word, but his word reveals that we are kings and priests, a royal priesthood. To search out what our infinite God has hidden in finite words is our glory also.

The Rabbis insist that there is at least one more level of meaning to concern ourselves with – the spiritual meaning. Your spirit is your heart. It is the throne room within you where Jesus reigns as Lord and King, but he is far MORE to us than that. He is also our Friend and Bridegroom. When we read his word – rooted in what it meant to others – we also hear his voice speaking words of revelation for ourselves.

The person without the Spirit does not accept the things that come from the Spirit of God but considers them foolishness, and cannot understand them because they are discerned only through the Spirit.
(1 Cor. 2:14 – NIV)

The spiritual meaning of scripture takes us higher than the mind, higher than this world, into heavenly places where we are seated with the Father in Jesus. Only the Spirit of God can reveal it, because it is personal revelation: What is God saying to me right now in this verse? It might not have same message for you as the last time you read it, because God said,

“From now on I will tell you of new things,
of hidden things unknown to you.
They are created now, and not long ago;
you have not heard of them before today.

If Proverbs 25:2 can be applied to us as the royal priesthood, then so can 25:3. God, by filling our spirits with his Spirit, has made our hearts as unsearchable as Solomon’s.

Who was scripture given to?

Who can understand the words of an unsearchable God?

A people with unsearchable hearts.