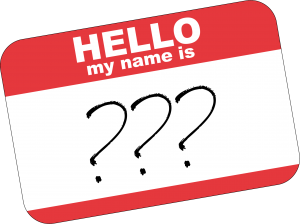 The title of this article is intended to lull you to sleep so that I can detonate a bomb in your spirit-man later. The effect is greater when we don’t expect to find anything worth our time in the “badlands” of the Bible, like the lists of names.

Sure, everyone knows about the Bible’s “begats,” but few readers are aware that they contain prophesy, because we don’t translate the names. Instead, we transliterate them.

Transliteration means taking a foreign word and writing it with English letters that approximate the sound it makes in the other language. For example, Mary is the English transliteration of Miriam from Hebrew.

Translating names gives us the meaning of the name instead of the sound it makes. Miriam means troubled – and so the two Marys were – for the safety of baby brother Moses and baby son Jesus. Every name in the Bible has meaning. In Hebrew, the word for name is shem, but it also means a person’s fame, reputation, character, or glory.

When Moses asked God to show him His glory (Ex 33:18), he was really asking to know God by His name. God’s answer to Moses was this:

And Hashem descended in the anan, and stood with him there, and called out the Shem of Hashem.

Every time we see LORD in capital letters in the Bible, the original was YHVH, transliterated YHWH in latin, sometimes written with vowels inserted as Yahveh, Yahweh, or the English Jehovah. This name is so sacred to Jews that they do not dare to speak it. When they read YHVH, they say Hashem.

So what did God tell Moses His Name means?

‘The LORD, the LORD,

a God merciful and gracious,

and abounding in steadfast love and faithfulness,

forgiving iniquity and transgression and sin,

yet by no means clearing the guilty,

but visiting the iniquity of the parents

and the children’s children,

to the third and the fourth generation.’

All that from just four letters? Yes, a name is more than the sound it makes. It reveals hidden mysteries about who the person is, or what may take place in his or her time upon the earth.

Let’s take a look at the first name list we come to in Genesis, Chapter 5. This is the first ten generations from Adam to Noah. Translate the names in this list, and see what happens.

Ready for the bomb? Read the second column as a sentence:

Man is appointed mortal sorrow, but the Blessed God shall come down, teaching His death shall bring the despairing comfort.

In Name Lists, Part Two, we’ll translate the names of the twelve tribes of Israel to reveal a powerful prophesy of God’s deliverance.