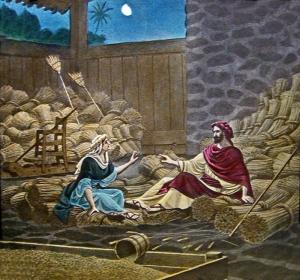 In Part One we considered Jesus’ statement that he is the door or gate of the sheepfold. Following the law of first mention, we saw the first occurrence of the word for door or gate associated with Lot. He became a closed door between the Sodomites and his heavenly visitors, and we noticed that he resembles the church in several ways.

Lot’s offspring were the Moabites and Ammonites, that today we would call the people of Jordan. When we come to the story of Ruth the Moabitess, we find another striking type of the church.

In our case, Jesus is the door of the sheepfold, but Ruth’s redeemer was Boaz, who happened to be the tenth man from Abraham in the line leading to David the king, and to Jesus the Son of David.

Ruth is a descendent of Lot and a Gentile bride, who is redeemed by lawful marriage to a man in the direct line of Abraham. She goes out to glean and happens upon the fields of Boaz. Late in the afternoon he goes out to speak with her, and offers his protection as long as she stays with his servants and on his land. She bows to the ground before him and accepts him as her lord.

He in turn, offers her a drink from the heavy water jars brought out for the harvesters, and he gives her a meal of bread dipped in wine vinegar. It is a type of the bread and wine Jesus serves us when we accept him as Lord.

Look how carefully-worded Naomi’s instructions to Ruth are in Chapter 3:

“Therefore, wash and anoint yourself, put on your best garment and go up to the threshing floor: but do not make yourself known to the man until he has finished drinking and eating. Then when he lies down, take notice of the place where he lies. Then you shall go in, uncover his feet, and lie down; and he will tell you what you should do.” – Ruth 3:3-5 OSB

Ruth – as a type of the church – is to wash in the water of baptism, receive the anointing of the Holy Spirit, and put on her best garment (the righteousness of Jesus) before going to meet him. After Boaz eats and drinks (as Jesus did at the last supper), she lies down at his feet where he lies (as Jesus did in the tomb) and waits for him to awaken and tell her what to do.

She joins him in his death, and arises with him in his resurrection. In the next scene, Boaz sends Ruth home with six ephahs of grain for her mother-in-law, while he goes alone to redeem her at the city gate.

The six ephahs are a coded message for Naomi. A man in Israel had to finish all his work in six days, and rest on the Sabbath. Naomi says,

“Sit still, daughter, until you know how the matter will turn out; for the man will not rest until he has concluded the matter today.”

How is Boaz like a door for Ruth? His redemption of her dead husband’s land, and her marriage to him causes the elders at the gate to say, “She will have a name in Bethlehem.” This statement gave her citizenship in Israel, in spite of her Gentile heritage. Without this, her great-grandson David would not have been able to become king.

One more thing. When Solomon built the temple, he flanked the doorway of the Holy Place, where the presence of God was, with two pillars. He named them Jakin (He establishes) and Boaz (In Him is strength). What kind of strength? Boaz became a doorway to the presence of God, because he had the strength to redeem.